I set out to build the Strat of my dreams…

And along the way, I become “enlightened” about the process, the parts and the tools necessary for building a basic bolt-on neck electric guitar. 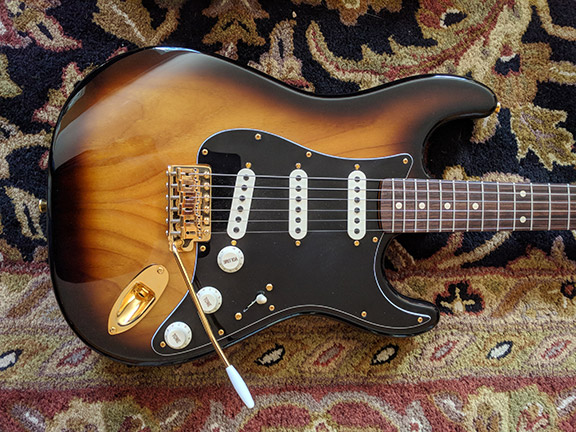 Having been a guitar player for most of my life (50 years give or take) my fascination with the guitar began as a kid. I started out playing guitar during the Beatles invasion and played throughout my adult life in various blues and rock bands. I’ve owned many famous and valuable guitars over the years but my main axes were mostly Fenders… Strats and Teles. I’ve always loved the versatility and sound of the 3 single coils on a strat, played clean through a blackface fender amp with a little reverb. The Telecaster covers everything else I can’t  get from a strat… Not being a big fan of the humbucking pickup sound, I’ve never been a Gibson man, but I have owned and sold a few Gibson guitars over the years.

The latest version of my guitar collection included, a vintage 74 hardtail strat, which I had owned and played for the last 15 years, a newer GE Smith model telecaster and an old 50s Gibson GA-75 amp. I was getting to the point where I wasn’t playing as much because I really just didn’t connect with the strat anymore… I wanted a fatter neck, a tremelo model and the guitar, although having some vintage vibe and cool factor, just didn’t sound that good to me. I was really playing the Tele more day-to-day. I started looking at custom shop strats with the specs I wanted and found Wildwood Guitars online. During a trip to visit my daughter in Boulder Colorado, I stumbled on the fact that Wildwood Guitars was right down the road in Louisville CO. So, I made a trip to Louisville and discovered the strat(s) of my dreams, a 54 model with a big maple neck at 6.9 lbs. I was like WOW! This is what I’m looking for… It was light, great neck and great sounding pickups. I left, pretty psyched about that guitar. The only caveat, the list price was was $4400. Which considering the mind blowing prices for vintage gear these days, is not too much for a quality strat with those features, but out of my price range. I went back home to NC contemplating my options. So, I decided to sell my existing stuff and try and buy a Wildwood strat and reboot my guitar collection somehow.

While I was preparing to sell my current guitars and contemplating the pricing etc. I revisited the Warmouth Guitar site (which I’ve done periodically over the years) to look at strat bodies for color combinations and I started wondering about the possibility of trying to build a guitar with their bodies and necks? Could I build a light strat with a fat neck, something like the strat I played at Wildwood? Big Hmmm… I had done some Frankenstein guitar building with parts of other guitars in the 80s, so I knew how to solder and do basic guitar electronics but I had never actually bought all the parts and started from scratch! And I didn’t want to end up with a crap guitar at the end of the experiment… I wanted to end up with a quality guitar that I would “want” to play. Honestly, there aren’t that many components to a bolt-on neck guitar, so it seemed like it was something I could do if I took my time and proceeded with caution. And with all the how-to videos at my disposal, I decided it was worth a try…

To get started, I began looking for the lightest strat bodies I could find on the Warmouth site. Then I ordered 2 necks; a solid maple and a rosewood board neck with the “fatback” profile which was closest to the 50s Fender necks I wanted for my guitar. After I received the necks and weighed them, I had a weight range for the body and I started purchasing the other components. With the bridge, tuners, electronics, pickups and miscellaneous other parts weighed, I came up with a body weight range that would produce a finished guitar under 7 lbs. A Strat body 3 lb 5 oz. or under was what I needed. After watching the Warmouth site for months I realized a solid strat body under 3 lbs. was the holy grail and super hard to find… I ended up purchasing a 3 lb. 4 oz. chambered alder body initially but a few weeks later I saw 2 (WTF!) ash bodies under 3 lbs. and I was lucky enough to snag one. I purchased a 2 lb. 14 oz. ash body which I had painted Sherwood Green metallic. So, I had the parts to start building 2 complete strats, and I had a strategy for how I wanted to build the guitars but I had to face reality: I couldn’t afford to screw up on my budget. If I wanted to end up with a high quality strat, and do it for less money than “buying” a factory guitar, I had to proceed carefully and start researching the “assembly” part of my build.

Tools of the Trade

So, what tools do you need to build a bolt-on neck guitar you ask? Well, turns out I had some of the tools already, Dremel for drilling holes, screwdrivers of course, and a soldering iron for doing the electronics i.e. wiring the guitar. In addition to the basic stuff, I discovered I needed some additional items like a reamer for the tuner ferrule holes, a pin point tool for marking where holes should be drilled (pickguard/tuners) and a couple more specialized tools; like the great trem spring puller from Stewart McDonald, made specifically for vintage 6 saddle tremelo bridges… Speaking of Stewart McDonald, every guitar builder/owner should know this company. They are a one stop source for all the hard to find tools and supplies you might need for building a guitar, repairing a guitar or just maintaining your own guitars. In addition to the best collection of guitar specific tools, they also have a huge library of how-to videos that provide helpful insight on guitar building and repair jobs. I contacted their tech support for advice a number of times while I was building my guitars.

I started the build process by reviewing the things that I needed to accomplish: Install the tuners, wire the electronics and pickups, drill the holes for the pickguard, strap holders and install the bridge and trem claw in the body. Warmouth pre-drills the bodies with holes for the bridge, trem claw and the neck pocket… necks have the tuner holes pre-drilled for the specified tuner type and size. I decided to tackle the tuners first, so I checked a couple videos on installing 6 inline tuners. In the video I used, they used a small reamer to open up the holes provided for the ferrules somewhat. Then they used an adjustable wrench, and a couple pieces of solid pcb board placed between the back of the neck and on top of the ferrule, to apply pressure with the wrench to push the ferrules in place. This actually worked pretty well and I was able to install the 6 ferrules with only a small amount of nerves… keeping in mind that if I screwed up, I might wreck a $345. neck. No pressure! Now that I had the ferrules in place I needed to drop the tuners in the ferrules, line them up, and drill the holes for the screws that hold the tuners in place permanently.

I’d heard a lot of horror stories about tuner screw heads stripping out and or breaking off, so I was nervous about making sure the holes were drilled properly i.e. the right size and depth and, I had the correct screwdriver head for the small screws. I was a getting nervous again… Ha! After I put the tuners in the correct position top to bottom, I used a straight edge to make sure they were lined up. At that point you need to take a pinpoint tool (pin mounted in a wood handle) and try make a mark in the center of the tuner screw holes without moving the tuners. This is a lot harder than it sounds and I had to realign and try again a couple times to see where I had marked. Tough to hit the center of a hole from an angle… Satisfied with the marks I made I used the pin tool to make the holes a bit larger. I got out my Dremel and put in a 3/32″ bit with a piece of tape to mark depth and drilled the 9 holes without any issues. It was down to screwing the tuners in place and I would be done with my first step in the build. After checking a number of phillips head screw sizes I found one that I thought fit the tiny screws pretty close and proceeded to screw in the screws. I proceeded with caution, and I did back a couple out that started to feel like they weren’t going in smoothly but I got all of them in and tightened them down, breathing a sigh of relief. Onward to build step 2…

After the tuner installation was out of the way, the rest of the build was not as nerve wracking… I had to drill holes for the pickguard and trem back plate which was fairly easy. Making sure the holes are placed as close to center for the pickguard is tough because if the screws don’t go in straight, of course, it doesn’t look too good. And I was going for a perfect build if possible. Sometimes you have to accept pretty good for the sake of experience. The wiring of the pickups and electronics is really about careful and accurate soldering… which is an art in itself, but I had some experience doing this over the years so I was o.k. in that department… I did become a little obsessed with making perfect solder joints at the expense of a number of wasted “test pots” while I experimented, but I decided my soldering skills were adequate if not better than most. I completed the pickguard/pickup assembly and installed the loaded pickguard and I was ready to put the finishing touches on the guitar… Install the neck, trem cover and string it up, plug it in and see what it sounded like! Success!

4 thoughts on “Adventures in Guitar Building!”